Record growth in the first quarter

Sales of Packeta Group, Owner of Zásilkovna, Exceeded 1 Billion Crowns per Quarter for the First Time in History. The Number of Shipped Parcels Grew by 158%.

Packeta group, which owns the prominent Czech technological company Zásilkovna and other companies providing pick-up point services, logistics and delivery abroad, has recorded the turnover of 1,09 billion crowns for the first quarter of 2021. This represents an increase of 163% year-on-year. It is the first time in Packeta’s history that it has surpassed the one billion CZK turnover mark in a quarter. The number of shipped parcels reached 16.9 million which is an increase of 158% year-on-year. The group increased the number of pick-up points; their number has increased by almost 1 000 for the first three months of 2021 to more than 6800 (4 650 in the Czech Republic). In 2020, Packeta generated revenues of CZK 2.5 billion.

0 %
turnover growth
0 %
growth in the number of parcels 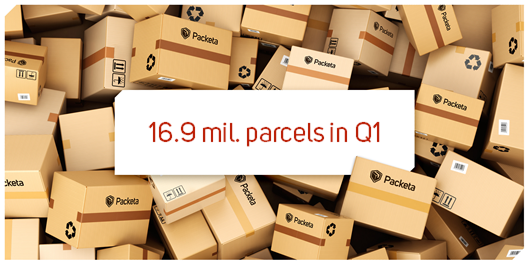 “All markets in which the Group is active in contributed significantly to Packeta’s record results. We grew in Germany, Hungary, Poland, Romania and, of course, Slovakia. The segment of sending parcels between individuals and the launch of Z-Boxes also contributed significantly to the growth. We are currently preparing several new projects for our customers within the delivery system but also within virtual services in e-commerce. We are also working on an interesting foreign acquisition. We would like to present everything by the end of June,” says Simona Kijonková, founder of Zásilkovna and CEO of Packeta Group.

At the end of September last year, Packeta launched Z-Boxes in the Czech Republic, eco-friendly, contactless, self-sufficient pick-up points which are powered by a solar panel and controlled via mobile app. By the end of May, more than 500 Z-Boxes will be installed in the Czech Republic and Slovakia. “We currently have hundreds of contracts signed for further Z-Box installations. We have already managed to reach agreements with more than 50% of small and medium-sized municipalities with a population of up to 1,000 inhabitants, but we are also targeting residential projects, shopping centers, manufacturing plants, hospitals, petrol station networks and schools,” adds Simona Kijonková. At the end of 2021, the total number of installed Z-Boxes should be in the thousands. This will concern the Czech Republic, Slovakia and also other Central European countries.

The service Between Us for shipping parcels between individuals was also successful: the number of downloads of the mobile application Zásilkovna exceeded 1.5 million; the application was ranked the 3rd most downloaded application on Google Play; it also did well on AppStore where it holds first place in the category Best Free Application.

This year, Packeta Group is targeting a turnover of CZK 5.2 billion and 70 million shipped parcels with a total value of CZK 84 billion. It plans to increase the number of pick-up points to 9,000 (5,000 in the Czech Republic).The growth of the total number of depots will correspond to the growth of the whole group. There will be a total of 43 depots with a total area of 100 000 m2.

In terms of penetrating new markets, Packeta will focus on the Middle East where it currently delivers parcels to the United Arab Emirates. By the end of the year, it plans to launch services to 8 more countries in this region.